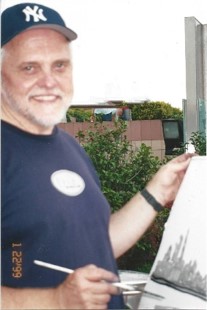 Don lives in TriBeCa in New York City.  His studio is in Goshen, Connecticut   He has studied painting, drawing, printmaking, and etching at Wesleyan University and at the New School, the Stacy Studio Workshop, and the Koho School of Sumi-E in New York City and at the American Center for the Arts in Paris.  His paintings are in collections in the United States, Europe, and Australia.

Many of his works are mixed media: Ink and oil pastel on paper. He has developed a unique mixed media technique that produces extraordinarily vivid colors.  He also works with oils for subjects that call for deeper hues.

He received his B.A. from Wesleyan University in mathematics and studio arts.  He also has a Masters and a Ph.D. degree from the University of Chicago.  For fifty years he was a full-time faculty member at Columbia University (and is now retired).  He has traveled extensively in the United States, Europe, Australia, Asia, and Latin America.

His works have won many awards such as Best in Show, Awards for Achievement in Mixed Media, Awards for General Excellence, and Artist of the Month as well as several Honorable Mention Awards.  He has had several solo shows in New York City, New York State, and Connecticut and has exhibited in numerous juried group shows in the Northeast.  Images of his work appear in Salann magazine and in Art of Connection.

Don has been an active participant in the community of artists. He has served on the boards of JAM Gallery (NYC), Artwell, and the Kent Art Association.  He is also a member of the Canton Artists Guild, the Housatonic Valley Art League, 14th Colony Artists, the Voice of Art, the Washington Art Association, and the Mamaroneck Artists’ Guild.

Don was a founding board member of Columbia University’s Research Center for Arts and Culture.  He was also a founder of Columbia’s Institute for Not-for-Profit Management, taught Columbia courses on Management of the Arts for many years, and worked with Museums Collaborative to conduct training programs for executives of numerous arts organizations – large and small, including the Metropolitan Museum of Art and the Museum of Modern Art.  He has also assisted the Whitney Museum and the New York City Ballet with their marketing activities and consulted for the Metropolitan Opera, the Pittsburgh Public Theater, and many well-known organizations such as IBM, Unilever, Citi, Pfizer, MetLife, DuPont, UNICEF, Boeing, and Coca-Cola.

Return to the “Scenes of New York” Virtual Exhibit

Return to the “9/11 Afterwards” Virtual Exhibit