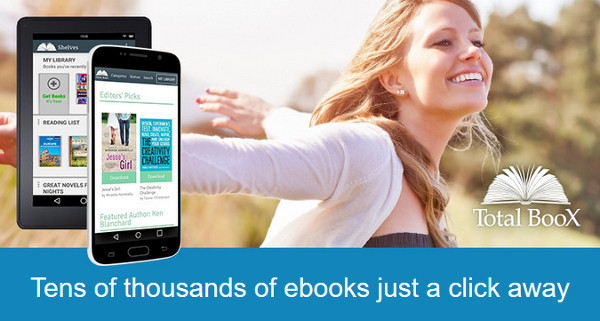 Did you know you can keep the eBooks downloaded from Total BooX for as long as you want?

Total BooX is an eBook service that Westchester Library System has been subscribing to since September 2013.  It offers a new model for reading that allows multiple users to borrow the same book simultaneously, unlike other eBook services such as OverDrive and Freading which allow only one user to read one copy of an eBook at a time. So, the eBooks on Total BooX are always available. There are no waiting lists, no expiration dates, and no fines. Patrons may download as many eBooks as they like at their convenience and keep them as long as their library cards are valid. They can read the eBooks offline once they download them.

What’s on Total BooX that is worth downloading and keeping?

Let’s start with what IS NOT on Total BooX. Although Total BooX has partnered with more than 50 world class publishers, the Big Five publishers – Hachette, HarperCollins, Macmillan, Penguin Random House, and Simon & Schuster – are not among them as of now. So the eBooks published by the Big Five are not available on Total BooX. Patrons may borrow most of them from OverDrive, another eBook service the library subscribes to.

There are limited choices of foreign language books and high quality children’s picture books. The majority of the 50,000 eBooks on Total BooX are in English. Most of them are for adults and young adults.

The strength of the Total BooX collections lies in the areas of classics, travel guides, computer technology, engineering, health and wellness, and other nonfiction.

The classics collection includes books by literary giants such as Voltaire, Milton, Shakespeare, Fitzgerald, Ayn Rand, and tales by Hans Christian Andersen, Alexandre Dumas, Daniel Defoe, Jules Verne, and other well known authors. These time-tested books have been read by generations. Readers often re-read them at different stages of their lives. They are great treasures for patrons to keep.

The most recent travel guides published by Lonely Planet, Insight Guides, and Berlitz are accessible on Total BooX. They provide tons of information on accommodation, restaurants, and tourist sites all over the world. They are especially helpful for people who travel to places where Internet is not readily available.

The vast collections of computer, technology and engineering eBooks on Total BooX range from artificial intelligence to web programming, from aeronautics to telecommunications. eBooks such as WordPress 4.X Complete and Wiring Simplified are worth downloading and keeping as reference books to help students study and as handy tools for professionals to refer to.

There are many more eBooks from Total BooX that are worth having, including health books and bestsellers. Patrons may find them on the websites of Total BooX and the Catalog of Westchester Library System, download as many as they like, and keep them as long as they want.

The following are a few valuable eBooks I found on Total BooX to share with you and to provide you a quick glance at the rich collections. Explore and see what treasures you can find on Total BooX. Don’t forget to share them with us!