It’s that time again! Summer reading is here, and more fun and exciting than ever! This year's theme is Reading Colors Your World. We will be celebrating community, diversity, arts and imagination and the Earth! We’ve lined up some meaningful programs, and have put extra thought into our challenges to create a summer to remember!

Our program will last from June 1 to August 6.

Kids, ages 0-12, can read, complete 20 challenges, and enter a raffle for Playland tickets for the whole family!

It is our pleasure to introduce Stacey Lee as this year's Summer Reading Ambassador. Lee is a fourth-generation Chinese American writer of Young Adult fiction and historical fiction and founding member of "We Need Diverse Books."

Join us for a book launch, a night of poetry, author talks, painting workshops, summer baking, book clubs, an exploration of poetry and Cajun culture, an earring workshop, and so much more! 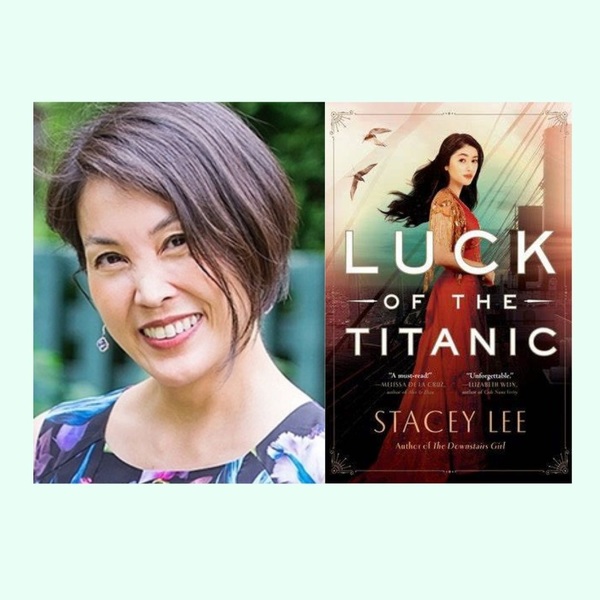 The Harrison Public Library is pleased to have award winning author Stacey Lee join us as this year's Summer Reading Ambassador. She will be discussing her new book, Luck of the Titanic, recently released in May 2021.

Stacey Lee is an award-winning author of historical and contemporary young adult fiction, including Under a Painted Sky; Outrun the Moon, winner of the 2017 Pen Center Award for Young Adult Fiction and the Asian Pacific American Librarians Association YA Book of the Year; The Secret of a Heart Note, which sold in eight countries; The Downstairs Girl, which received five starred reviews and which Booklist called “Spectacular," and her latest novel, Luck of the Titanic.

Her books have been selected for the Amelia Bloomer list for feminist fiction, the as well as the YALSA Best Fiction for Young Adults List, and the New York Public Library's Best Books for Teens. A native of southern California and fourth-generation Chinese American, she is a founder of the We Need Diverse Books movement and writes stories for all kids (even the ones who look like adults). Find her @staceyleeauthor on Instagram and Twitter.

ABOUT LUCK OF THE TITANIC
From the critically-acclaimed author of The Downstairs Girl comes the richly imagined story of Valora and Jamie Luck, twin British-Chinese acrobats traveling aboard the Titanic on its ill-fated maiden voyage.

Valora Luck has two things: a ticket for the biggest and most luxurious ocean liner in the world, and a dream of leaving England behind and making a life for herself as a circus performer in New York. Much to her surprise though, she’s turned away at the gangway; apparently, Chinese aren’t allowed into America.

But Val has to get on that ship. Her twin brother Jamie, who has spent two long years at sea, is there, as is an influential circus owner, whom Val hopes to audition for. Thankfully, there’s not much a trained acrobat like Val can’t overcome when she puts her mind to it.

As a stowaway, Val should keep her head down and stay out of sight. But the clock is ticking and she has just seven days as the ship makes its way across the Atlantic to find Jamie, perform for the circus owner, and convince him to help get them both into America.

Then one night the unthinkable happens, and suddenly Val’s dreams of a new life are crushed under the weight of the only thing that matters: survival. 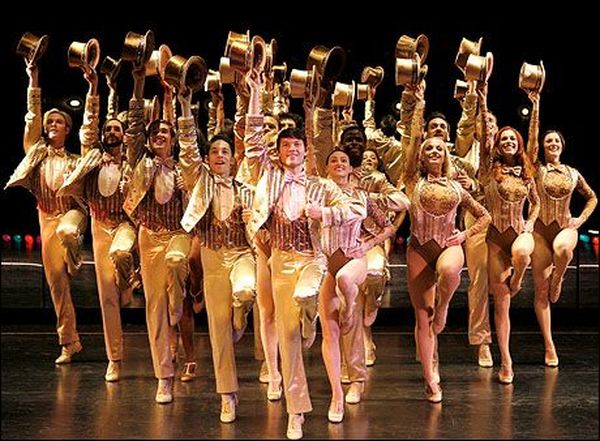 Join us for a new dance program with the Studio B Dance Studio of Eastchester, NY. Teens are welcome to join the fun! Other dates include July 13 and July 27. 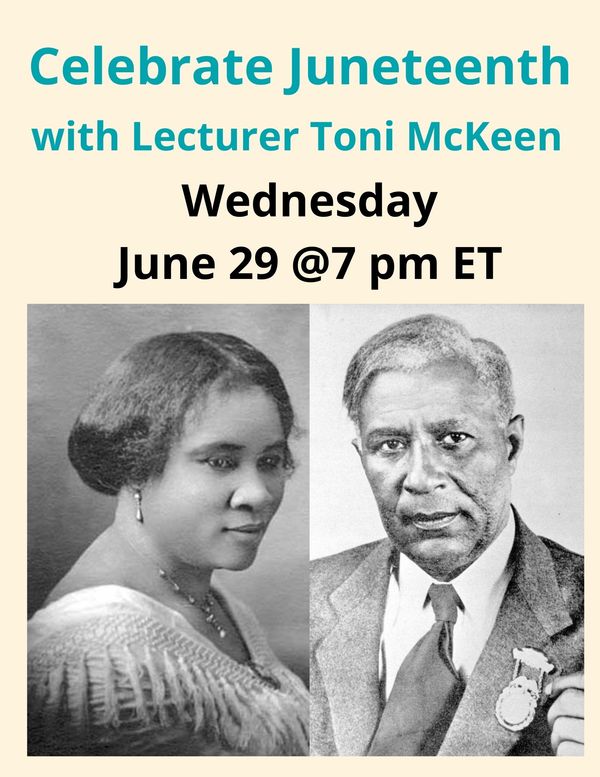 In honor of Juneteenth, also known as Freedom Day, lecturer Toni McKeen will be discussing Garrett Augustus Morgan, a successful inventor of the gas mask and traffic light, and Madame C. J. Walker, the first female American self-made millionaire, an American entrepreneur, and a political and social activist. She overcame a difficult life to become America's wealthiest African-American businesswoman.

Are these names unfamiliar? Join us and find out how they changed the world! 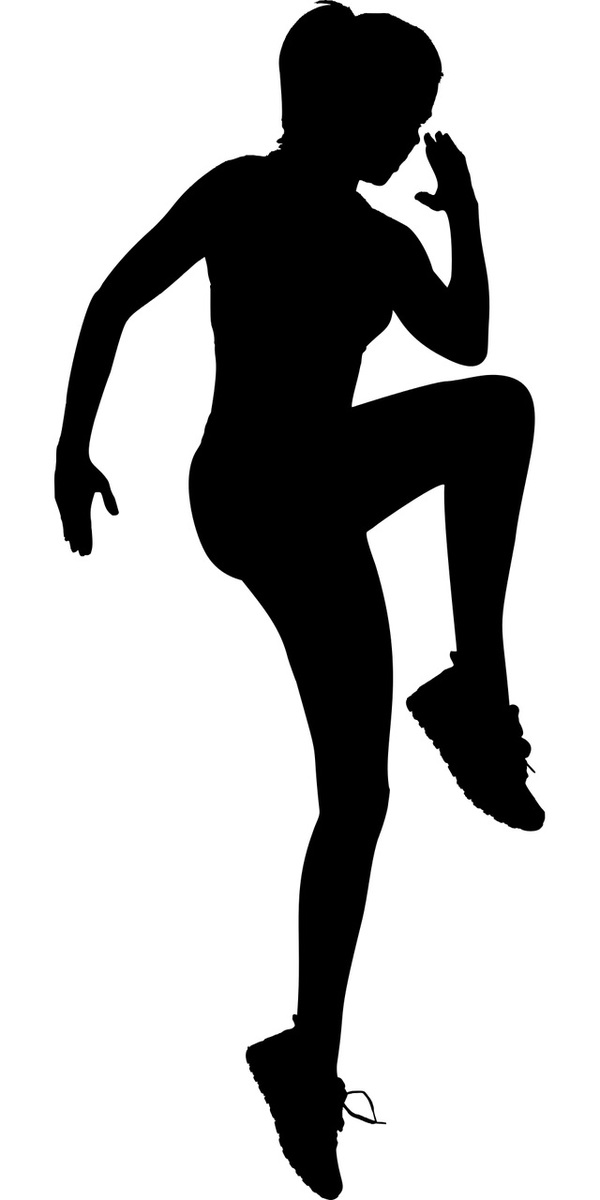 Join us for this new Zumba Gold series with instructor Diane Sorg. Beginners are welcome and there is NO DANCE EXPERIENCE required!  Choreography is easy-to-follow and class focuses on all elements of fitness:  cardiovascular, muscular conditioning, flexibility and balance!  Come ready to have FUN in a non-judgmental zone! Wear comfortable clothing and bring water.

ZUMBA GOLD® is a part dance/part fitness program for adults who are looking for a modified Zumba® class that recreates the original moves you love at a lower intensity.

Join us for a new dance program with the Studio B Dance Studio of Eastchester, NY. Teens are welcome to join the fun! 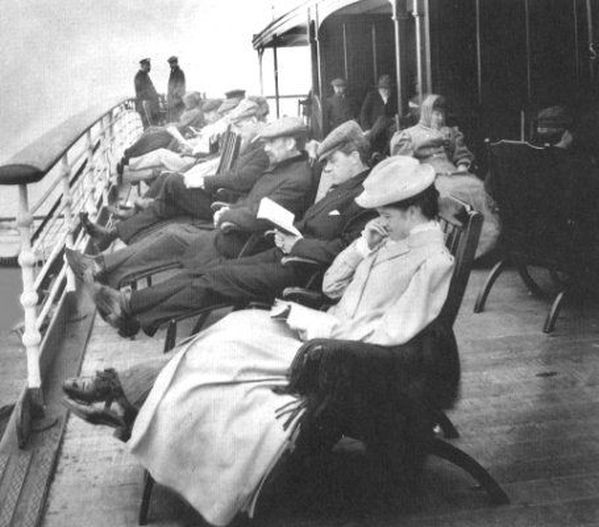 Talk on the Titanic with Toni McKeen

Join us for a special talk on the Titanic and its impressive roster of passengers as presented by lecturer extraordinaire Toni McKeen. Teens are welcome!

The Titanic was a luxury vessel and the largest moveable man-made object of its time whose maiden voyage was also its last when it sank on April 15, 1912 off the coast of Newfoundland in the North Atlantic. Over 1,500 of the 2,240 passengers and crew lost their lives in the disaster. The Titanic's passengers numbered 1,317 people: 324 in first class, 284 in second class, and 709 in third class. Of these, 805 were male and 434 were female; 112 children were aboard, the largest number of which were in third class. 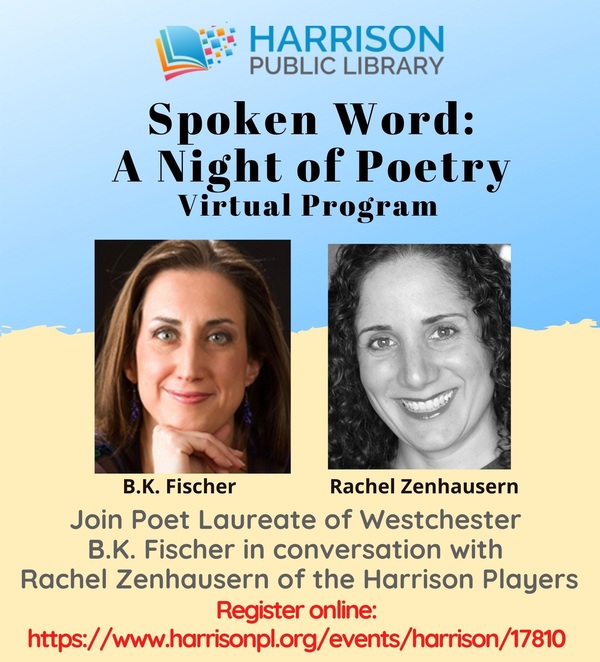 Calling all poets and writers! Westchester Poet Laureate B.K. Fischer will be joining us for a special, summer Spoken Word event, which will be moderated by Rachel Zenhausern.

If you are interested in reading a piece, please contact Giovanna Fiorino-Iannace at giannace@wlsmail.org to sign up in advance. Each person will have up to 5 minutes to present.

Teens are welcome to join us!

About B. K. Fischer 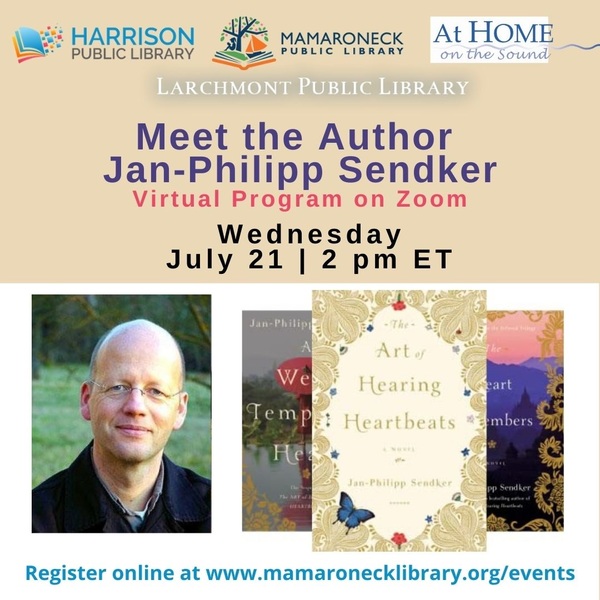 We read his books, now we get to meet the author this summer! Bestselling author Jan-Philipp Sendker will be joining us from Italy, where he is located at the moment.

Register in advance at HERE.

Jan-Philipp Sendker was born in Hamburg in 1960. At the age of 13 he wrote in a school essay about what he would like to do as a grown up: Write novels. He finished school but never went to university. Instead he started writing novels. Despite brilliant ideas and promising first chapters, he never wrote more than twenty pages. He moved to Paris for inspiration, studied the language and the parisian life-style – both with very limited success. Back in Germany he worked as a freelance journalist until the prestigious weekly magazine Stern hired him as a reporter. In 1990 he became their US-correspondent, based in New York City. Five years later he moved to Hong Kong to work as the Asia-correspondent for Stern. Afterwards he took all is courage and savings to ask for three years of unpaid leave so he could finally write his first novel. The Art of Hearing Heartbeats was written in a small farm house in upstate New York. He quit his job three years later to become a novelist and lives with his family in Potsdam, Germany. His books are translated into more than 35 languages. His Burma novels The Art of Hearing Heartbeats and A Well Tempered Heart have been number one bestsellers in many countries.

Paint a Masterpiece with Connie Manna

Back by popular demand! Create a masterpiece with art instructor Connie Manna.

The first 20 people who register will receive a painting kit including a canvas, acrylic paints, and a paintbrush. The kits will be ready for pick up on Monday, July 19.

All are welcome to join us on Zoom. No experience is required.

Register to receive the Zoom link. 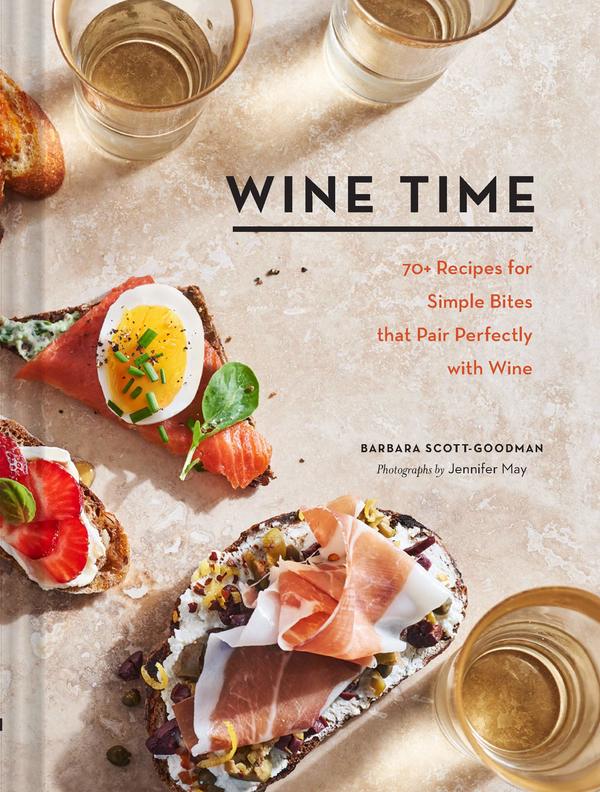 Food Lit with Book Ya Ya and Barbara Scott Goodman

Join us for an evening event with Barbara Scott Goodman, author of Wine Time: 70+ Recipes for Simple Bites That Pair Perfectly with Wine.

This is a fresh, modern follow-up to the bestselling Wine Bites, featuring 65 brand new recipes with suggested pairings, beautiful food photography, and a stunning package.

Wine lovers rejoice! In this updated edition of the bestselling Wine Bites, Wine Time includes more than 65 all-new recipes for simple, scrumptious bites to go with your glass of vino. There are recipes for every occasion, whether a barbeque or book club, romantic date night or solo dinner, as well as wine pairings that complement each dish. With the added bonus of wine cocktails, step-by-step instructions for putting together a first-class cheese board, and a chapter on sauces and chutneys to elevate an hors d'oeuvres spread, this is an indispensable resource for anyone who likes to host parties, drink wine, and dabble in the kitchen.

Register online through Book Ya Ya.

Join us for a new dance program with the Studio B Dance Studio of Eastchester, NY. Teens are welcome to join the fun! 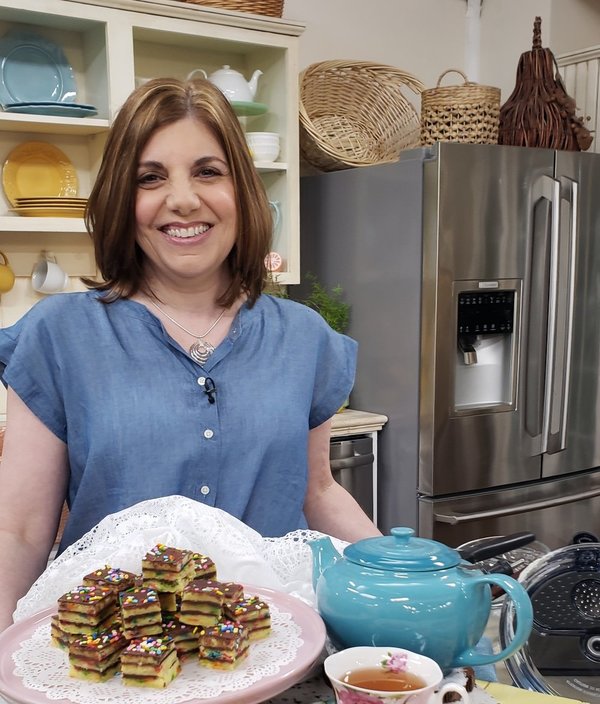 Back by popular demand! Award-winning baker, Tina Zaccardi, will be showing us how to make a summer fruit tart.

The recipe will be posted on the events calendar soon. 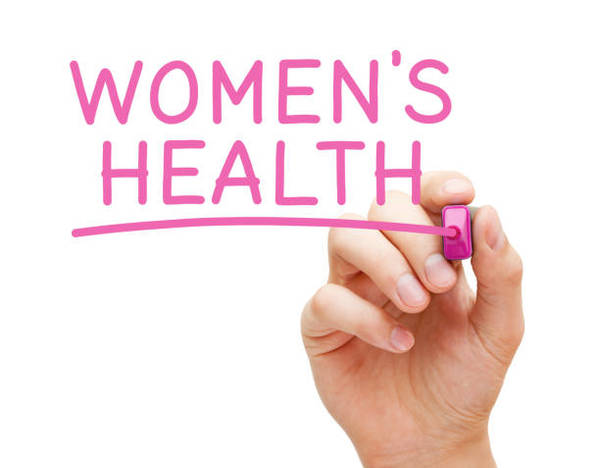 Dr. Nidhi Sharma will be discussing common Pelvic Health challenges and how hormonal changes of pregnancy and menopause cause symptoms like bladder weakness, pelvic pain and sexual dysfunction. She will provide research based information and some simple lifestyle changes that can help/prevent symptoms.

A large number of pelvic health dysfunctions are preventable if proper pelvic floor care is performed during pregnancy, post pregancy and during menopause. 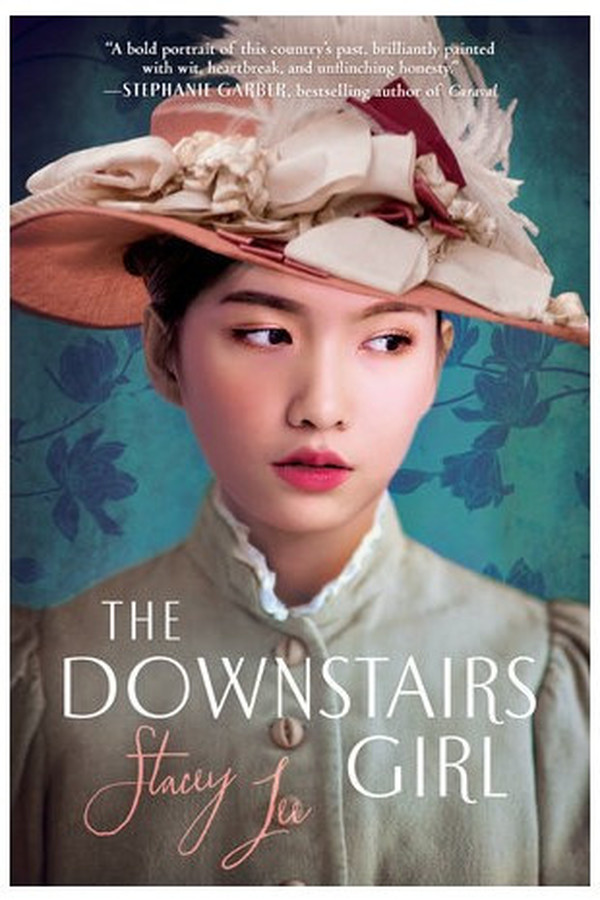 This month  the book club will be discussing our Summer Reading Ambassador's bestselling novel, The Downstairs Girl.

About the Book and Author

From the critically-acclaimed author of Under a Painted Sky and Outrun the Moon and founding member of We Need Diverse Books comes a powerful novel about identity, betrayal, and the meaning of family.

By day, seventeen-year-old Jo Kuan works as a lady's maid for the cruel daughter of one of the wealthiest men in Atlanta. But by night, Jo moonlights as the pseudonymous author of a newspaper advice column for the genteel Southern lady, "Dear Miss Sweetie." When her column becomes wildly popular, she uses the power of the pen to address some of society's ills, but she's not prepared for the backlash that follows when her column challenges fixed ideas about race and gender. While her opponents clamor to uncover the secret identity of Miss Sweetie, a mysterious letter sets Jo off on a search for her own past and the parents who abandoned her as a baby. But when her efforts put her in the crosshairs of Atlanta's most notorious criminal, Jo must decide whether she, a girl used to living in the shadows, is ready to step into the light. With prose that is witty, insightful, and at times heartbreaking, Stacey Lee masterfully crafts an extraordinary social drama set in the New South.

"This vividly rendered historic novel will keep readers riveted as witty, observant Jo deals with the dangers of questioning power." --The Washington Post

"Holds a mirror to our present issues while giving us a detailed and vibrant picture of life in the past." --The New York Times

Copies will be available for check out at the library.