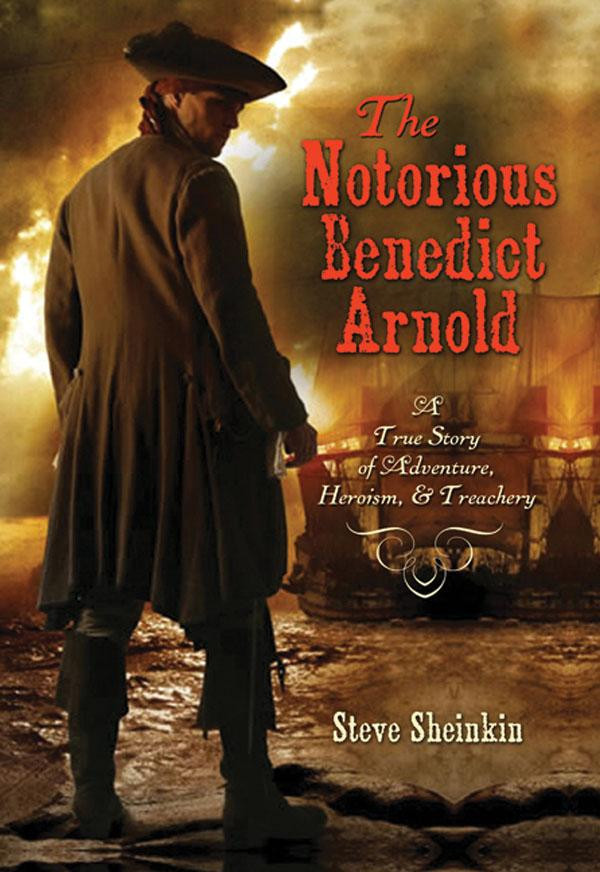 We are a country that continues to grow. Sometimes, two steps forward and one step back, but we are progressing. In most cases, we have learned from past mistakes, hoping never to repeat the events that we would rather forget. But history shows that there are many things we should and can be proud of and it is important for young people to not just hear about them, but read about the struggles involved. If they enjoy what they read, even better. It offers an even greater impact for lessons learned.

By pairing non-fiction, or, what is now referred to as “narrative non-fiction,” with historical fiction, we can educate minds while we entertain the spirit. I have a few of my favorites here, but please do not limit these to just your students or children. You will also enjoy these well written, fast paced, historic events that have created the nation we live in today.

Steve Sheinkin is a genius at weaving facts into an engaging narrative. The Notorious Benedict Arnold (2010, Grade 5 and up) is an engaging page turner. When most people think of Benedict Arnold, the word traitor comes to mind. As usual, there is much more to the story. The truth is, in the beginning of his military career, Benedict Arnold was a very brave, popular, and yes, patriotic commander fighting for our independence from the British.  What made him turn? Sheinkin breathes life and adventure into this biography of a man who let his ego, anger, and hunger for power almost alter the course of history. Through letters and other resources, Sheinkin keeps readers wanting to know what will happen next. It is a factual, biographical thriller in every sense of the word.

Sophia’s War by Avi (2013, Grade 4 and up) is a poignant fictional companion to Sheinkin’s biography. After twelve year old Sophia Calderwood witnesses the execution of Nathan Hale – one of the heroes of our Continental Army in British occupied New York City, her independent spirit ignites and she resolves to do all she can to free her young country from British tyranny. She becomes a spy for them and uncovers a plot against West Point designed by none other than Benedict Arnold, the star general of the American forces.

Equally well written is Laurie Halse Anderson’s novel Chains (2010, Grade 5 and up). It tells of the sad irony of a young slave girl, Isabel. She is asked to spy for the rebels who are fighting for their freedom against the British, while she is kept in chains. Isabel wonders, “If an entire nation could seek its freedom, why not a girl?”

Anderson’s sequel, Forge (2012) is riveting and a worthy addition to a fictional study of the American Revolution.

Three more exciting novels that beautifully wrap our fight for freedom from the British around fictional narrative are:

Master storytellers and Newbery award winners Russell Freedman and Jim Murphy contribute a nice selection of narrative non-fiction suitable for grades 4 and up. These following books describe the facts behind the blood, sweat, tears, and diplomatic intellect of a nation and its leaders, fighting not just to survive, but to be born.

For younger minds (grade K and up), the picture book, The Ride: The Legend of Betsy Dowdy by Kitty Griffin and the non-fiction book Those Rebels, Tom and John by Barbara Kerly (Grade 2 and up) introduce the story of our young country’s growing pains and battles to become a nation. As Griffin’s title suggests, The Ride is a legend that has been retold for 200 years, and only gets better with age. “She couldn’t stop King George. She couldn’t fight as a soldier. But she could ride.” And 16 year old Betsy does just that. She flies on her horse, Bess, braving ice and cold, malicious highwaymen, and the fear of capture by the redcoats, all to warn American General Skinner and his brave militia that the British are coming. The illustrations and artwork by Marjorie Priceman with the deep colors and flashes of light enhance the dramatic and historic life and death tension.

Lastly, Barbara Kerly’s factual portrayal of two very different men, Thomas Jefferson and John Adams, proves that strong men of character and intellect can put their ideological differences aside for the greater good of a nation that longs to be free. A great lesson and read for today’s political leaders and candidates. The true story behind their creation of our Declaration of Independence is a very powerful and purposeful message that resonates loudly  today and even more so when it inspires growing minds.