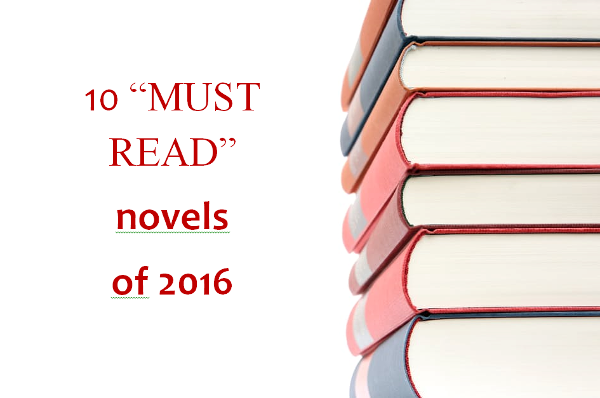 2017 is right around the corner, and with that, I want to call your attention to books, really good books that were published this past year that you might have missed.

Hamlet is telling his story in utero.

Deeply unsettling, this story of murder and deceit will leave you aghast as you learn of a pregnant mother’s plan to do away with her husband.

The Trespasser
by Tana French

Smart writing with a tightly-woven plot for lovers of police-procedure mysteries.

In this sixth installment of Dublin Murder Squad series, detectives investigate a seemingly open-and-shut case of domestic violence which, as they dig deeper, becomes anything but routine. Secrets are uncovered, with twists that will keep the reader turning the pages long into the night.

Before the Fall
by Noah Hawley

This thriller grabs you right at the beginning and doesn’t let go.

A private plane carrying some very influential passengers crashes down on its way from Martha’s Vineyard to New York City. There are two survivors, a young child and a struggling artist. Questions remain. Why did the plane crash? Was it intentional? Who, if anyone, was behind this tragedy?

A Gentleman in Moscow
by Amor Towles

This multi-layered, character-driven story contains charming anecdotes and wonderful descriptions of life in one of the world’s most lavish hotels, and, wow, what an ending!

It’s 1922 and Count Alexander Rostov has been sentenced by a Bolshevik tribunal to live out the rest of his life in a single attic room in the Metropol, a grand hotel in Moscow where movie stars and Russian royalty gather. Over his 30 years in captivity, the count is determined to lead a decidedly rich existence surrounded by friends and loved ones. Life under Bolshevik and then later Communist rule is the background for this cleverly written novel.

Well-loved author of Once We Were Brothers and Saving Sophie turns out another great read.

Back in Nazi-occupied Poland, Lena Woodward made a promise to her best friend, Karolina that she would find out what had happened to her friend’s abandoned twin girls. Seventy years later, Lena, now 89 years-old enlists the help of a husband and wife investigation team to keep her promise. In order to do so, she must recount the horrible atrocities committed by the Nazis. The story weaves seamlessly back and forth from World War II to present day where Lena must finally reveal the secret that she’s been keeping for so many years.

The Expatriates
by Janice Lee

There’s so much to discuss in this poignant and compelling story of three expats living in Hong Kong.

The lives of three women, a young Korean and recent Columbia grad, a wealthy housewife and a happily married mother of three, become entwined as they go about their day-to-day lives in a small expat community in Hong Kong. Over time, each must come to terms with their secrets and their losses.

Contemporary story of racism in America.

Thought-provoking narrative of Ruth Jefferson, an African-American labor and delivery nurse, who is barred from caring for a newborn whose parents are white supremacists. A courtroom drama ensues that brings to light the vile parameters of racism.

The Nix
by Nathan Hill

A powerful political satire that revolves around a disjointed mother and son relationship.

Samuel Anderson is an unhappy college professor and struggling writer who is shocked to find out that the mother who abandoned him as a child, has recently committed a crime against a right-wing politician. Her actions cause an internet sensation and propel her into the media spotlight. Samuel has a shot at literary fame as he researches her story and, in the process, begins to understand a woman that he only thought he knew.

A charming modern-day retelling of Shakespeare’s The Taming of the Shrew which will delight you to the very end!

Set in Baltimore, Maryland, a widowed Russian scientist hatches a plan to marry off his oldest daughter in order to keep his foreign-born research assistant from being deported and thus, help advance his beloved research project. His headstrong daughter, Kate wants no part of this crazy plan and does her best to thwart off the brash young man’s advances in this funny and sweet love story.

The Wangs vs. the World
by Jade Chang

Funny and heartwarming story of a Chinese-American family that takes a road trip.

Successful businessman, Charles Wang, has somehow managed to lose the family fortune that he worked so hard to create. Now that he has sold his factories, what is he to do next but vacate his Bel Air mansion and embark on a road trip designed to gather up his children, scattered all across the country, and begin again. Charles has an idea that he will return to homeland China to try and reclaim some lost family land in the hope of rebuilding his financial empire.