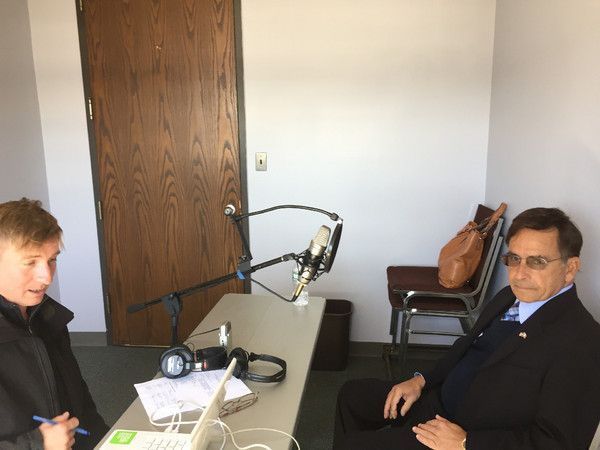 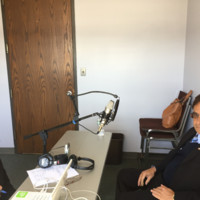 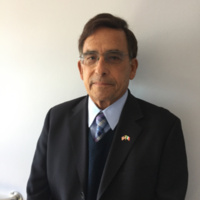 Would you please tell us your name and title?

My name is Joe Canella and I am the Harrison Town Justice.

How long have you lived in Harrison?

A math question, tricky. Pushing 30 years at this point.

When did you come here?

Do you mind telling us where you lived before?

That’s not that easy a question. All the questions, you said, were going to be easy. Favorite memory of the Town of Harrison. I think that, I think that in all fairness it’s probably a continuation of things like today, you know, like the Columbus Day Parade, you know. It’s every year, but nonetheless, it, you know, it fills the year with the atmosphere of what it is to live in this town and it continues. So, in terms of picking out a particular, single memory, I really can’t do that. I think it’s kind of a combination of memories which reflect, I think, the spirit of the residence, which is continuing.

Aside from days like Columbus Day, Harrison Day, are there other events that stand out in your mind that are quintessentially expressive of the community of Harrison?

Well, first of all, you know, we have, in addition to Columbus Day, obviously we have Memorial Day Parade, we have the Veteran’s Parade. So, we have a lot of civic things and any time there’s, you know, any time there’s an issue you’ll find community involvement, whether it be a fundraiser to signify a particular need or a particular event or a particular problem, and the community just, you know, joins together and kind of morphs into one, large, helpful body of people seeking to do what they can to make whatever the situation is better. So, it’s all of that.

Is it fair to say that you like living here?

I love it. It was, you know, a lot of times you move to different locations by accident. When I moved to Harrison in 1982 we were in the middle of a housing recession, there were very few house available, and I was living in Washington, wanted to move back to New York where I grew up, I grew up, actually, in Long Island. And me and my wife, Nancy, had two children at the time, twins. And, not a lot of time to find a place to live and interest rates were 16.5%. So, there wasn’t a lot of availability. There were very few homes on the market and I was commuting back and forth to Washington, which was impossible, during the Air Traffic Controller strike, to make it worse. So, I spent a lot of hours on the runway, and I had it one day and said, you know what, this weekend we’re gonna buy a house and we looked at number of ‘em, put bids in on five houses in one day and the only counter we had was the house in Harrison, right on Harrison Avenue. And, I didn’t, really didn’t know the town, didn’t know the area, and I remember when the broker called, I said, to my wife, I said which one was Harrison? And that’s how we wound up here. Purely by accident, and it was like winning the lottery.

In the time that you’ve been here, what stands out as the biggest change in the town that you’ve observed?

Well obviously, you know, obviously, as in all communities, you know, development comes in, neighborhoods change, you know, places that perhaps 50 years ago that you think would stay the same don’t. You know, they evolve. Things get replaced. And so, it’s the natural..., and things get more congested. I mean, that’s true and that’s not necessarily positive, but it’s part of the human condition, right? So, I think it’s just the natural evolution that comes with every community as it matures and, basically, builds out. Which Harrison has, as have all the neighboring communities as well. So, this is the biggest change, it’s physically

Well, I think the, you know, I think that, notwithstanding the fact that the town has changed physically and will continue to. It’s just, everything changes. You can’t lock things in time. It’s not possible. I think that what continues is that, you know, the foundation and the spirit of the community and the sense of being part of one community, notwithstanding the diversity that the town has, which is significant. There is a unified spirit in this town that goes back generations and continues and no matter what happens to the physical environment, and obviously we try to keep it as neighborhood and user-friendly as humanly possible, as long as that spirit’s there and that spirit maintains itself, I think that this place will remain, you know, as terrific a place as you could possibly find to live. And, I’m hopeful that that will be the case and from everything that I’ve seen I think that it will, because you continue to watch, notwithstanding the change, that fiber, just remains and continues and people are very enthusiastic. You look at all the volunteers, whether it be things that are obvious, like our Fire Department and things of that nature, and all of the Youth Council. You have so many volunteer organizations where people volunteer their time and effort for no reason other than to make this community as good of a place as it can possibly be. And, as long as that stays in place, which I absolutely believe it will, you know, you’re on the top of the curve, and I think that’s where we are and where we’re gonna stay.

Interview with Town Justice Joe Canella from the Magic Box Oral History Booth located at Town Hall during the Great to Live in Harrison Day Celebration at Riis Park on October 10, 2016.