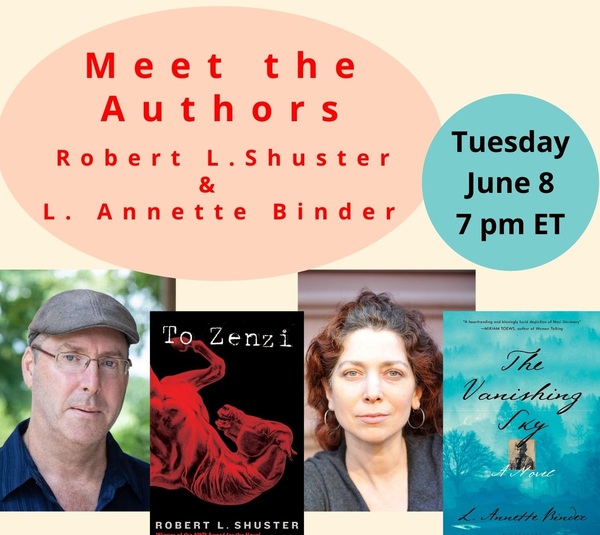 Join us for a special author event with Robert L. Shuster and L. Annette Binder. They will be reading from their books and discussing the process of writing WWII novels from the German perspective and how they incorporated their extensive research into their novels. A Q&A session will follow.

Signed copies are available for purchase from The Village Bookstore at 10 Washington Ave, Pleasantville, NY 10570; https://thevillagebookstore.net/

To Zenzi (AWP Award Series for the Novel) is the extraordinary story of Tobias Koertig’s odyssey through the apocalypse of Berlin in 1945. An orphaned thirteen-year-old who loves to draw, Tobias is coerced into joining the German youth army in the last desperate weeks of the war. Mistaken for a hero on the Eastern Front, he receives an Iron Cross from Hitler himself, who discovers the boy’s cartoons and appoints Tobias to sketch pictures of the ruined city.

Shuttling between the insanity of the Führer’s bunker and the chaotic streets, Tobias must contend with a scheming Martin Bormann, a deceitful deserter, the Russian onslaught, and his own compounding despair—all while falling for Zenzi, a girl of Jewish descent (a mischling) who relays secret news of death camps and convinces Tobias to make a treacherous escape to the Americans.

With thrilling risks in plotting and prose, with moments of pathos and absurdity, Shuster richly conjures a mad, tragic world.

The Vanishing Sky is a New York Times Book Review Summer Reading Selection. For readers of Warlight and The Invisible Bridge, an intimate, harrowing story about a family of German citizens during World War II. "There was no shelter without her sons."

In 1945, as the war in Germany nears its violent end, the Huber family is not yet free of its dangers or its insidious demands. Etta, a mother from a small, rural town, has two sons serving their home country: her elder, Max, on the Eastern front, and her younger, Georg, at a school for Hitler Youth. When Max returns from the front, Etta quickly realizes that something is not right-he is thin, almost ghostly, and behaving very strangely. Etta strives to protect him from the Nazi rule, even as her husband, Josef, becomes more nationalistic and impervious to Max's condition. Meanwhile, miles away, her younger son Georg has taken his fate into his own hands, deserting his young class of battle-bound soldiers to set off on a long and perilous journey home.

The Vanishing Sky is a World War II novel as seen through a German lens, a story of the irreparable damage of war on the home front, and one family's participation-involuntary, unseen, or direct-in a dangerous regime. Drawing inspiration from her own father's time in the Hitler Youth, L. Annette Binder has crafted a spellbinding novel about the choices we make for country and for family.

Getting It Noticed, and SOLD! ~ The Refreshed Home Workshop with Marie Graham