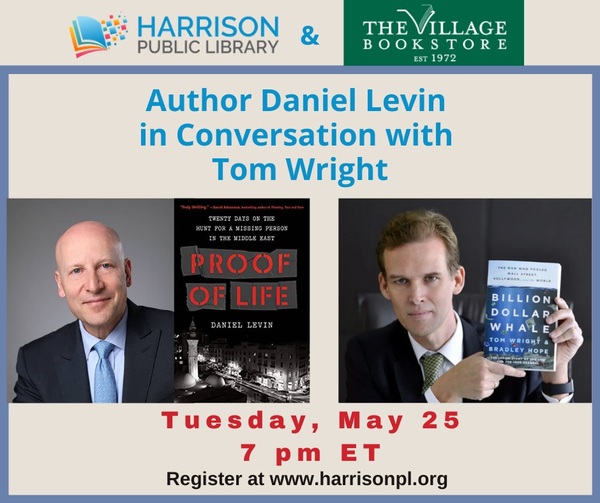 Join the Harrison Public Library and The Village Bookstore of Pleasantville for a special author event with Daniel Levin in conversation with Tom Wright, author of ​Billion Dollar Whale. They will be discussing Levin's new book -- Proof of Life: Twenty Days on the Hunt for a Missing Person in the Middle East, which is available for purchase at The Village Bookstore.

The son of a diplomat, Daniel Levin spent his early years in the Middle East and in Africa, and today lives outside New York City. A lawyer by profession, he has spent the last twenty years working with governments and development institutions worldwide, focused on economic development and political reform through financial literacy, political inclusion, and constitutional initiatives. He is also engaged in mediation efforts in war zones. Currently a board member of the Liechtenstein Foundation for State Governance, he helps monarchies as they consider ways to increase the democratic legitimization of their systems. Levin's first book, Nothing but a Circus: Misadventures among the Powerful, was published in Germany, Japan, Russia, and the UK. Proof of Life is his first book to be published in the United States.

Tom Wright is the coauthor of Billion Dollar Whale: The Man Who Fooled Wall Street, Hollywood, and the World and the cofounder of Project Brazen, a journalism-focused production studio. Tom worked for the Wall Street Journal for over twenty years. He’s a Pulitzer finalist and has won numerous journalism awards, including the Gerald Loeb Award for international reporting. In 2020, Stanford University honored Tom with its Shorenstein Award in recognition of his services to journalism in Asia.

About Proof of Life

Daniel Levin was at his office in New York when he got a call from an acquaintance with an urgent, cryptic request to meet in Paris. A young man had gone missing in Syria. No government, embassy, or intelligence agency would help. Could he? Would he? This begins the suspenseful, shocking, and at times brutal true-life story, PROOF OF  LIFE: Twenty Days on the Hunt for a Missing Person in the Middle East that finds Levin, a lawyer turned armed-conflict negotiator, navigating the seedy and dangerous underbelly of the Middle East, where he encounters powerful sheiks, drug lords, and sex traffickers in pursuit of the truth.

Over the course of twenty intense days, Levin barters and negotiates his way through Istanbul, Beirut, Amman, and Dubai on a quest to find a young man who disappeared under suspicious circumstances. This dangerous journey brings him into contact with the shadowy world of the underground war economy where everything is for sale, and he sees first-hand the power of the industries that endlessly fuel these conflicts—the trade of cash, goods, weapons, drugs and most devastatingly, people.

Levin also humanizes the citizens who live in the shadows of conflict, painting a heart-rending truth of the reality of forever wars, some of which he experienced firsthand in combat during his own military service. “This is a story about loss and sadness, about violence and death, about unspeakable cruelty and greed—the daily menu in Syria’s devastating war,” explains Levin, who has worked with governments and development institutions worldwide for the past twenty years and is engaged in track 3 diplomacy and mediation efforts in war zones. “I wrote this book because we have to stop ignoring the suffering caused by these forever wars, have to stop looking away. Our societies are breaking apart because we no longer have the capacity to care, unless our own personal comfort or benefit is concerned. We are completely detached from the immense pain caused by these wars. My goal was not the usual ‘give voice to the forgotten ones,’ because as soon as those stories end, they are forgotten again by most. Instead, I wanted to grab readers by the chin and force them to witness it all.”

Author Jennifer Hillier in Conversation with S. A. Cosby