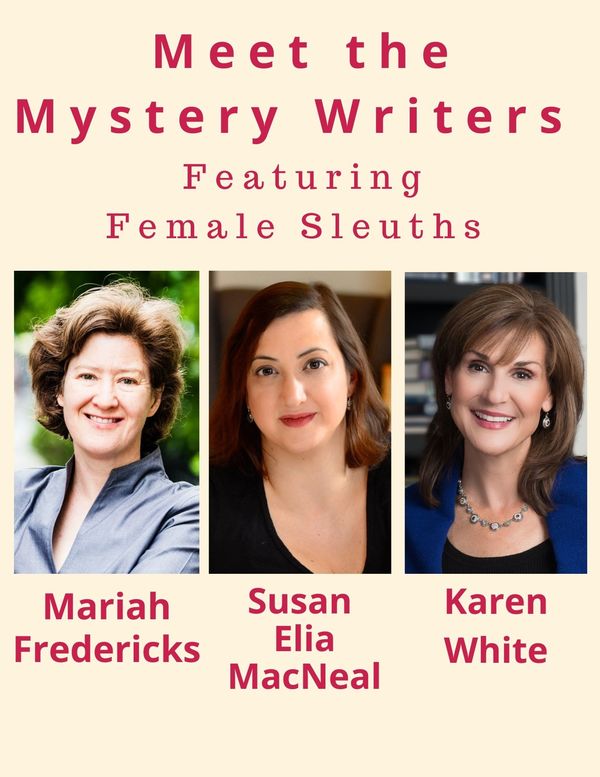 Mariah Fredericks is the author of the Jane Prescott mystery series, set in 1910s New York. She was born and raised in New York City and graduated from Vassar College with a degree in history. The Jane Prescott series of historical mysteries follows the adventures of ladies’ maid Jane Prescott who serves the wealthy and celebrated of 1910s New York. Beginning with A Death of No importance, Jane makes her way in a world filled with industrialists and anarchists, society ladies and suffragettes--the woman no one notices, but who sees everything. The latest book in the series, Death of an American Besuty, has been nominated for the Mary Higgins Clark Award.

Susan Elia MacNeal is the author of The New York Times, Washington Post, Publishers Weekly, and USA Today-bestselling Maggie Hope mystery series, starting with the Edgar Award-nominated and Barry Award-winning Mr. Churchill’s Secretary, which is now in its 22nd printing. Her books include Princess Elizabeth’s Spy, His Majesty’s Hope, The Prime Minister’s Secret Agent, Mrs. Roosevelt’s Confidante, The Queen’s Accomplice, The Paris Spy, The Prisoner in the Castle, and The King's Justice. The Maggie Hope novels have been nominated for the Edgar, the Macavity, the ITW Thriller, the Barry, the Dilys, the Sue Federer Historical Fiction, and the Bruce Alexander Historical Fiction awards. The Maggie Hope series is sold worldwide in English and has been translated into Czech, Japanese, Mandarin, Cantonese, and Turkish. It is also available in large print and audio. Actress Daisy Ridley (Star Wars, Murder on the Orient Express) has bought the film and television rights to the series.

Karen White is the New York Times bestselling author of 27 books, including the Tradd Street series, Dreams of Falling, The Night the Lights Went Out, Flight Patterns, The Sound of Glass, A Long Time Gone, and The Time Between. She is the coauthor of All the Ways We Said Goodbye, The Glass Ocean and The Forgotten Room with New York Times bestselling authors Beatriz Williams and Lauren Willig. Raised in a house full of brothers, Karen’s love of books and strong female characters first began in the third grade when the local librarian issued her a library card and placed The Secret of the Old Clock, a Nancy Drew Mystery, in her hands. Karen’s roots run deep in the South where many of her novels are set.  Her intricate plot lines and compelling characters charm and captivate readers with just the right mix of family drama, mystery, intrigue and romance.

Author Jennifer Hillier in Conversation with S. A. Cosby