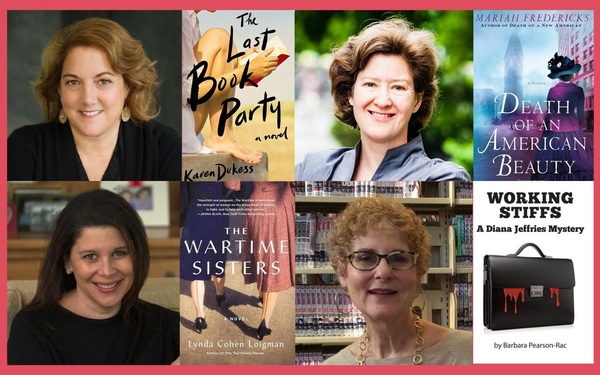 Whether you enjoy mysteries, historical fiction or contemporary works, we have the author for you! Authors Karen Dukess, Mariah Fredericks, Lynda Loigman and Barbara Pearson-Rac will be discussing their latest books with us and answering your questions.

Synopsis of the Books

The Last Book Party by Karen Dukess is a tale of ambition and romance, set in the publishing world of 1980’s New York and the timeless beaches of Cape Cod. Named a July 2019 Indie Next List Great Read, one of Parade's Most Anticipated Books of Summer 2019, an O Magazine Best Beach Read of 2019 and a New York Post Best Beach Read of 2019*

The Death of an American Beauty by Mariah Fredericks is the third installment in this historical fiction, murder/mystery series featuring Jane Prescott, a feisty female protagonist that works for a wealthy family during the Gilded Age 1910s in NYC. Jane Prescott is taking a break from her duties as lady’s maid for a week, and plans to begin it with attending the hottest and most scandalous show in town: the opening of an art exhibition, showcasing the cubists, that is shocking New York City.

The Wartime Sisters by Lynda Cohen Loigman tells the story of two estranged sisters, raised in Brooklyn and each burdened with her own shocking secret, are reunited at the Springfield Armory in the early days of WWII. While one sister lives in relative ease on the bucolic Armory campus as an officer's wife, the other arrives as a war widow and takes a position in the Armory factories as a "soldier of production." Resentment festers between the two, and secrets are shattered when a mysterious figure from the past reemerges in their lives.

Working Stiffs by Barbara Pearson-Rac is the author's fourth mystery featuring the same set of characters -- Diana Jeffries, Beverly, Margie and Allen. Beverly, one of Diana's cohorts in crime solving and a successful owner of Priceless Placements, turns to Diana for help when one of her temporary employees refuses an assignment, fearing for his safety since many executives have been found dead in their office. Officially, the deaths were ruled natural causes, but could they have been the result of murder?

The Village Bookstore of Pleasantville will have signed copies in stock for anyone who wishes to order a book.

This is an online program. Please register to receive the Zoom link.

A Writer’s Journey: From Italian-American Roots to Award-Winning Novels

The History of Golf in Westchester